1. Illumination of the mechanisms underlying hypothalamic regulation in fish

Reproduction in vertebrates is regulated by the hypothalamic–pituitary–gonadal (HPG) axis that involves an orchestra of neuropeptides, hormones and steroids working in synergy to establish a sexually active organism. The Gonadotropin-releasing hormone (GnRH) is considered the main neuropeptide regulating the activity of the gonadotropic hormones (GtH); luteinizing hormone (LH) and follicle-stimulating hormone (FSH), both directly affect the growth and activity of the gonads which in return secrets androgens and steroids that regulate the brain and the pituitary.

While hypothalamic GnRH is a positive regulator of the HPG axis, neuroendocrine release of hypothalamic dopamine -through DRD2 (Levavi-Sivan et al., 2005) - serves as a negative effector of HPG activity in many, albeit not all, fish species. This led to the generation of a spawning induction agent that contain a GnRH analog together with a DRD2 antagonist (metoclopramide), namely DAGIN (Drori et al., 1994). 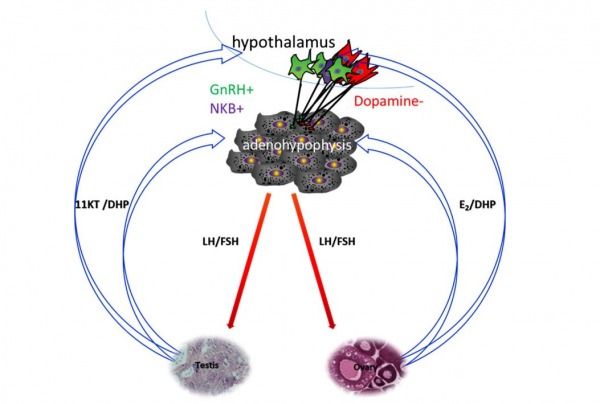 An important candidate fish for Israeli aquaculture is the grey mullet (Mugil cephalus), but it does not spawn in captivity. We succeeded in inducing spawning in mullets by means of a combination of GnRH analog and a dopamine antagonist, (Aizen et al., 2005).

Sturgeon is the source of caviar. In the wild, Russian sturgeon (Acipencer gueldenstaedtii; st) are late-maturing fish. We cloned the genes encoding FSHβ, LHβ and CGα subunits of this species and studied their expression levels (Hurvitz et al., 2005), as well as their receptors structure and specific activation (Atre et al., 2020; Yom-Din et al., 2018). Since in the sturgeon, males are destined for the meat market whereas females remain in culture for many more years – until they reach puberty – we have recently developed a method for gender identification by an endoscope (Hurvitz et al., 2007).

And the graphical abstract of Atre 2020

4.  Aquaculture in Third World Countries. Aquaculture has been hailed as the answer to cheap production food for the millions in the poor third world countries.

During the 1970's a predatory fish called the Nile Perch was stocked into Lake Victoria, Uganda, in order to improve the fishery. Unfortunately, it underwent a population explosion, causing the extinction of the native fishes that used to leave in the lake. These fish, mainly cyprinids, were the main protein source for the hundred thousands of poor Ugandan farmers who live around the lake. The aim of our project is to investigate the reproduction profiles of cyprinids from Lake Victoria, in order to generate technologies for stock enhancement and aquaculture. This work is funded by US AID-CDR, and was carried out in collaboration with Dr. Rutaisire from Univ. of Kampala.